Chances are, you probably already know how to make French fries. Toss sliced potatoes with a little bit of oil, transfer to a baking sheet, and bake until crispy. It’s so easy that your dog could probably do it, if only your dog had opposable thumbs.

So why do they never seem to turn out as golden and delicious as you expected?

Because, like with all seemingly simple recipes, there’s a way to getting things just right. Don’t worry—it’s not complicated. In fact, you don’t even need a recipe. To make really delicious oven fries, all you need is the right ingredients in the right ratios, plus a few basic techniques to achieve that mouthwatering crisp-on-the-outside, fluffy-on-the-inside texture. Here’s how to do it. 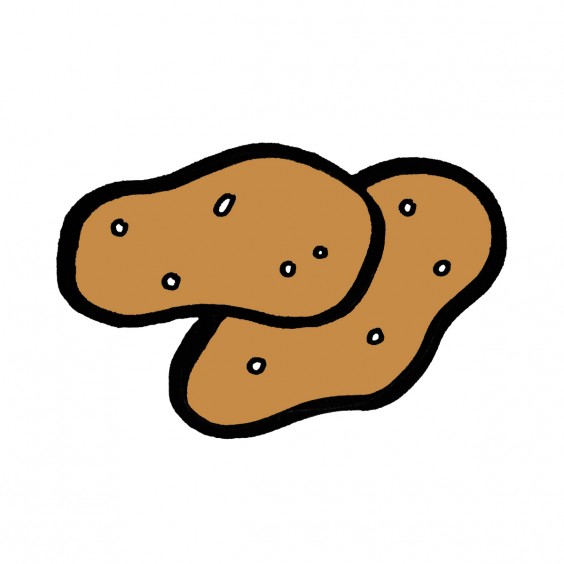 1. Start with the right spuds.

Opt for plain old Russet potatoes. Unlike Yukon Golds or red-skinned potatoes, they’re starchy instead of waxy. And that high-starch content is key for helping your fry crisp up on the outside while staying fluffy on the inside, says Paul Malvone, executive chef of the burger meal-delivery kit service BurgaBox. 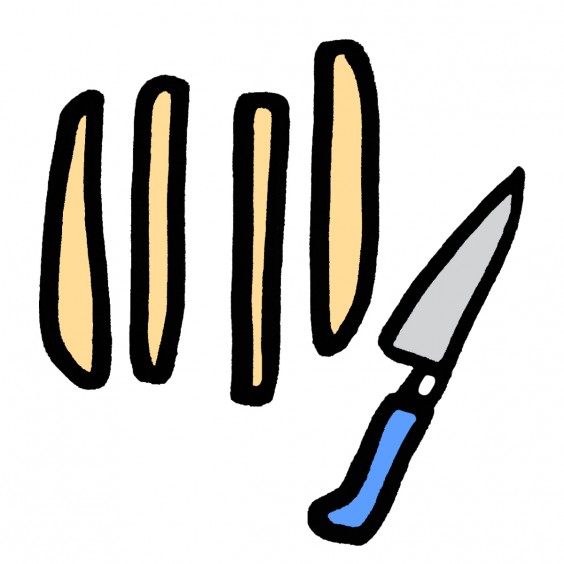 2. Slice them on the thinner side.

Just like a great French fry, a great oven fry needs the right balance of crisp outer crust to soft, fluffy center. To get that, you want potato slices that are about 1/4-inch thick, says Malvone. Fries sliced thinner will burn before they finish cooking through. Go thicker, and you’ll be veering into baked potato territory. 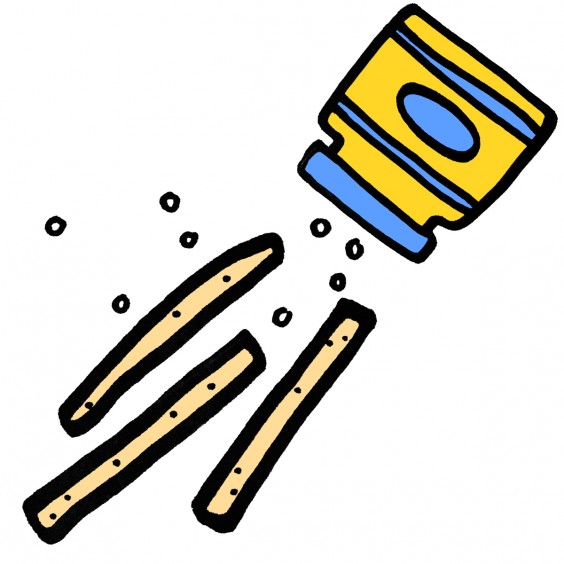 3. Pat them dry and toss with a secret ingredient.

Moisture on the outside of your potato slices makes it harder for oil to adhere to the surface. And if the oil can’t adhere to the surface, your fries won’t crisp up. Give your sliced potatoes a quick pat with a paper or kitchen towel to dry them off. Then toss them with a little bit of cornstarch, Malvone says. It might sound surprising, but the cornstarch absorbs even more moisture and helps form a crust-like outer layer that’ll deliver maximum crispiness. You don’t need much—just a tablespoon per pound of potatoes. 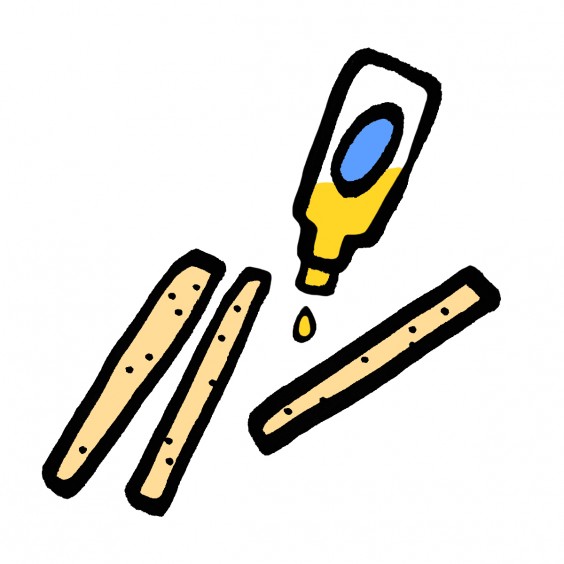 There’s no need to douse your potatoes in oil. But coating them in a thin layer of fat is a must for crisp, crunchy fries. “If you don’t use any oil, the texture will be softer, like a baked potato,” Malvone says. Use 1 to 2 tablespoons of olive or canola oil per pound of potatoes, and toss the potato slices with the oil thoroughly to make sure that every piece is fully coated. 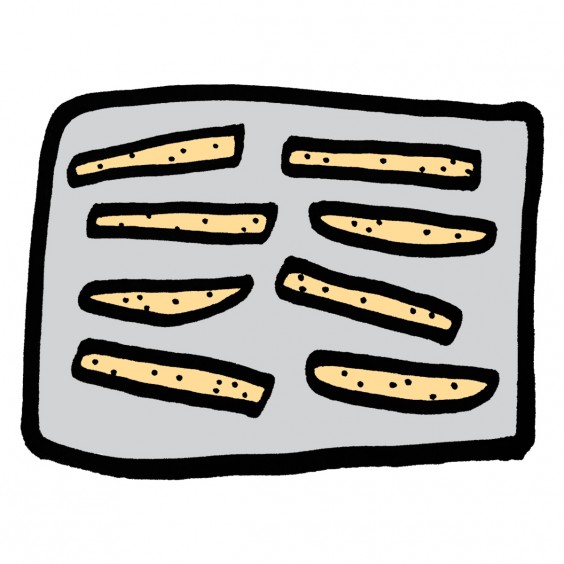 5. Spread them out evenly on the baking sheet.

Arrange potato slices in a single layer so no pieces are overlapping. (If the pieces overlap, use a second baking sheet or bake the potatoes in batches.) Spuds that don’t have enough breathing room will steam instead of crisp up, Malvone explains. 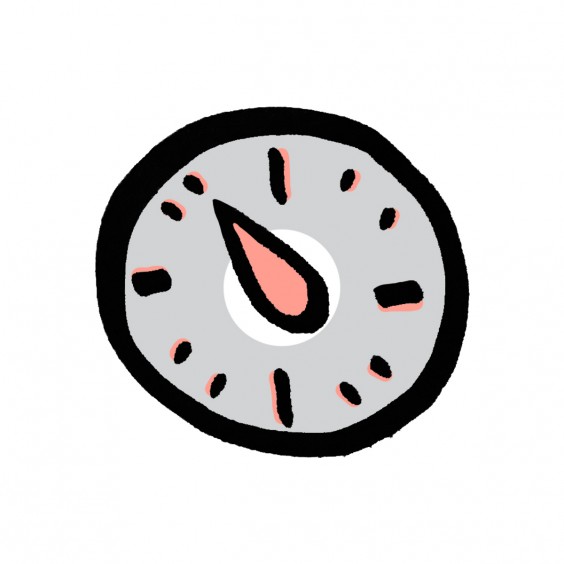 Heat—and plenty of it—gets fries crispy on the outside and creamy on the inside. The magic temperature is 450 Fahrenheit, Malvone says. Just make sure your oven has fully finished preheating before placing the fries inside. The super-high temperature will cause the outside of the fries to start sizzling immediately, sending them on their way to golden brown deliciousness. 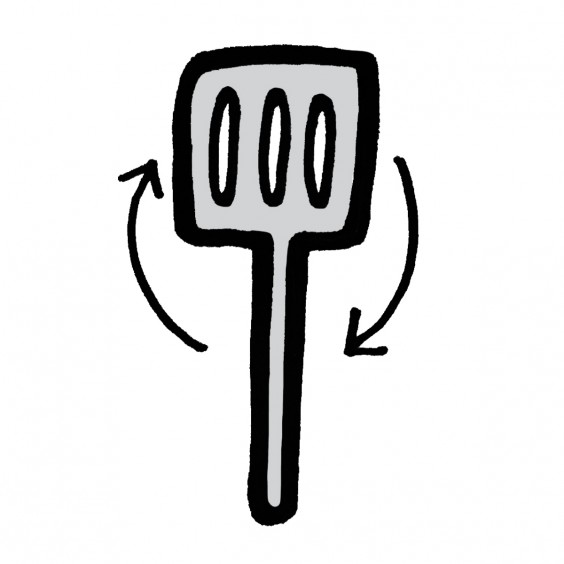 7. Flip them halfway through.

Fries are pretty low-maintenance once they’re in the oven. Just bake them for 20 to 25 minutes until they’re crisp and golden on the outside and soft on the inside. And make sure to flip them halfway through. That’ll promote even browning, so your finished fries are crunchy on all sides instead of just on the bottom, says Malvone. 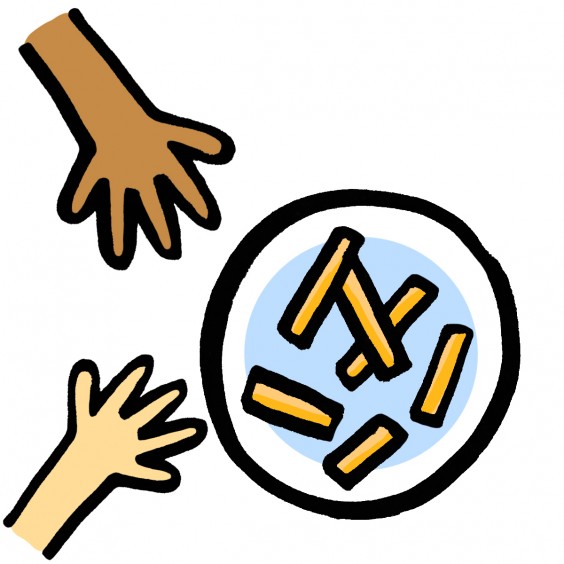 You probably won’t have much trouble here, but make sure to serve your fries hot from the oven (preferably with a sprinkle of sea salt for extra flavor). Just like French fries, oven fries start to lose their crispness as soon as they cool. So hurry up and dig in!

If you thought the spork was a culinary marvel, McDonald’s new frork will change your life… kind of. Josh King has the story (@abrodgetoland). Buzz60

The days of getting your fingers dirty while sopping up toppings with fries are over.

McDonald’s unveiled a “uselessly useful” utensil called a “frork” Monday in a hilarious infomercial hosted by McDonald’s Chef Mike and pitchman Anthony Sullivan. The frork is essentially a fork, but with French fries.

The frork was released as part of the rollout of McDonald’s new Signature Crafted Recipe Sandwiches.

As Sullivan notes in the infomercial, the frork was developed to ensure customers can scoop up any toppings that fall out of McDonald’s new pico guacamole, sweet BBQ bacon and maple bacon dijon sandwiches.

“When savoring these recipes, there’s a hitch you just can’t ditch: The topping dropping,” Sullivan says in the infomercial. “This is a real problem. Wait, sorry is this a real problem? Probably not, but good news we solved it anyway.”

Sullivan notes that the “flavor-focused” frork allows people to ‘Pico’p the Pico guacamole” that inevitably falls out of the sandwich, and save every last bit of the maple bacon.

“The frork is ludicrous-ly easy to use,” Sullivan says, noting that it can be used by those who are right handed and left handed, and even works in the dark.

The frork will be available while supplies last at participating restaurants on May 5 with the purchase of a Signature Crafted Recipe sandwich.

Because McDonald’s says an infomercial wouldn’t be a true infomercial without a toll-free number, the fast-food chain also included a phone number where the first 100 callers will receive a frork and the first 5,000 will recipe a coupon for a Signature Crafted Recipe sandwich: 1-844-McD-FRORK.